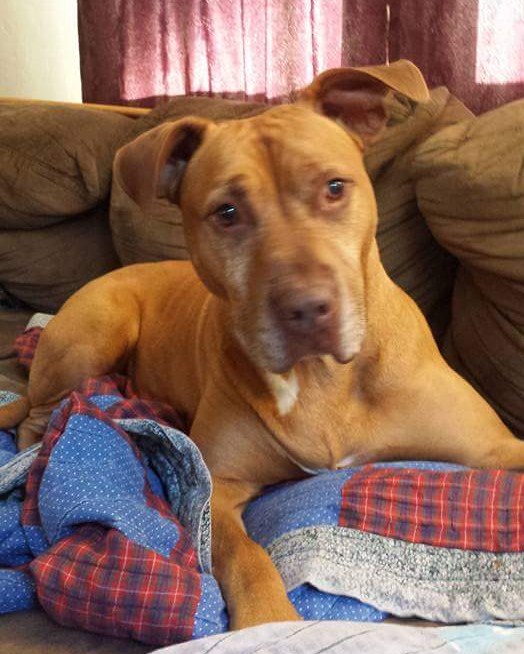 This great dog was found tethered to a telephone pole in the state of Georgia by a homeless gentleman.  After a short time together they relocated to New Hampshire.  When the man could no longer take proper care of Blitz, he was surrendered to Above the Notch Humane Society.

At the time that we received Blitz, who is a neutered, male, red Staffordshire terrier, he was friendly to just about everyone.  Since we did not know what his life had been like previously, there was no way of knowing if he had any personality issues or problems.

Blitz has spent the last 4 years with us.  Aside from getting out sometime during the day and taking walks, he has spent a better part of his days in a kennel and did develop some behavioral issues.   If anyone that he did not know walked by him, he would bark and jump on the kennel door.  We have been working to help him overcome and move past these issues.

Tuesdays became ‘Night with Blitz” at the kennel where we slowly introduced him to new people.  This boy did have what we considered trust issues where he was wary of people that he did not know.  We slowly introduced him to new people so that he would not react to them in a negative way.  He now has a circle of human friends who he trusts and his behavior has improved so much from when we first started.  Blitz, once he has met and trusts you, is very friendly and lovable.  It has been said of him that he has a very sweet soul.  However, he does still need more training in order to be a ‘good citizen’ in public. 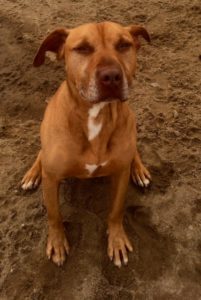 The Above the Notch Humane Society Board of Directors last June (2015)  made the decision to send Blitz to the All Dogs Gym in Manchester, New Hampshire run by Gail Fisher, a well known dog trainer. They started  working toward furthering his socialization training.   What was recently discovered is that Blitz problem is not so much that he does not trust but that he never learned the skill of   how to develop relationships.  This was a big breakthrough and has seen some very amazing results.

One of his trainers named Jez, had fallen in love with Blitz and decided to foster him in her home with her other 3 dogs of which one is a bulldog and the other a pit bull.  After some period of adjustment for all, Jez and her family made the decision that they could not live without him and decided to make it a permanent arrangement.

On Janury 26th, 2016, it was an absolutely fabulous day for Above the Notch Humane Society and Blitz. …..….for on this day, our boy Blitz, had been ADOPTED!!!!

Blitz is now in the forever home that he so truly deserves.   After all the time, effort, care and love, he now has a home with 3 canine brothers as well as a Mom and a Dad who have a very big couch.  We are so grateful to his new family for all that they have done to facilitate this wonderful event.  God bless you, our Blitz .and his new family.  We hope he will be happy for the rest of his life.